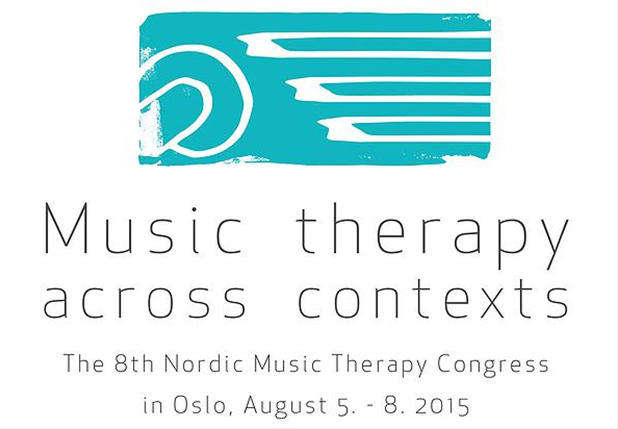 The RHYME project contributes with three papers, one poster and a round-table to the 8th Nordic Music Therapy Congress. The theme of the conference is “Music therapy across contexts” and is arranged in Oslo at the Norwegian Academy of Music from August 5th to 8th   2015.
Four of six RHYME members are contributing at the NMTC conference. Anders-Petter Andersson presents a paper on “Composing Interactive Music for Shifting Between Diverse Contexts”. Birgitta Cappelen presents a paper with the title “Vision for the Future of Music Technology for Music Therapy and Music and Health”. Karette Stensæth presents a  poster with the title “Will the future home environment be musical, digital and interactive?” and together with Ingelill Eide the paper “Umberto Eco’s notions ‘The open work’ and ‘A field of possibilities’: New perspectives for music therapy?” Even Ruud is chairing a round-table with the title “From Music Therapy to Music and Health”,  a theme of great importance to the RHYME project.
Read the paper abstracts here.

RHYME directly benefits users and points to the future

The Polly World  installation as part of the RHYME project was invited to become part of the programme for Arts and Culture in Norwegian Schools, called “The Cultural Rucksack” (Den kulturelle skolesekken). This is a unique cultural programme financed by the Arts Council of Norway. The objectives are to help “school pupils to become acquainted with all kinds of professional art and cultural expressions” and to “… enjoy artistic and cultural productions provided by professionals.” (www.kulturradet.no)

In the programme Polly World represents something quite new as an interactive and multi-sensorially stimulating installation, both genre-vice as installation art and regarding participation. Polly World is an offering for children with multiple and severe disabilities to engage in artistic co-creation on equal terms.

In this way the RHYME research project contributes uniquely, not only, with knowledge to its academic communities and with new technology prototypes, but also with Art and Cultural experiences for the actual use group.

Many years of research shows that Art and Cultural participation promote health, and that aesthetic qualities and experiences motivate activities. We now also have a lot of traditional health and welfare technology that monitors patients in different ways. Through 4 generations of RHYME prototypes we have developed ground-breaking health improving technology to motivate co-creation on equal terms. With Polly World now being part of the Cultural Rucksack programme, RHYME combines health improving technology and participation in art and cultural activities in an innovative  way.

The RHYME project hereby enters a new paradigm within health improving technology. This is a paradigm where aesthetics and cultural dimensions are essential in the health promoting activities, and the technology enables accessibility and distributed cross-media co-creation on equal terms. This is a vision for the future of health and welfare technology: A Cultural and Aesthetic-based Welfare Technology.

At 18.00 on Tuesday April 14th is the opening of the first public exhibition of Polly World at Kunst og Designhall HiOA (old Art Academy in St. Olavgate 32).  Polly World will also be open for visitors from 16.00 to 19.00 on Wednesday April 15, Thursday April 16 and Friday April as part of the conference “Aesthetics and Children with Special Needs“.

During the conference both RHYME member Karette Stænseth, Anders-Petter Anderssson and Birgitta Cappelen will make presentations/talks about different perspectives on RHYME, related to the conference theme.

Video with App on Vimeo

The RHYME book is here!

RHYME member Karette Stensæth has worked very hard for a long time to write and edit the book  about RHYME called “Music, Health, Technology and Design”. The book is part of the Book Series from Centre for Music and Health and can be ordered here.

From the back side of the book (see the orange page above):
“Imagine that objects in your home environment – let us say a pillow, a carpet or a toy – became musical and interactive. Do you think that they could offer new ways of playing and being together? Could they even have the potential to reduce isolation and passivity and promote health and well-being for some of us?

This anthology, the eighth in the Series from the Centre for Music and Health, presents a compilation of articles that explore the many intersections of music, health, technology and design. The first and largest part of the book includes articles deriving from the multidisciplinary research project called RHYME (www.rhyme.no). They engage with the study of the design, development, and use of digital and musical ‘co-creative tangibles’ for the potential health benefit of families with a child having physical or mental needs.

Well-known international researchers broaden the picture on the book’s topic in the second part. They ask: How can video-based visualisation techniques of music-related body motion diagnose health problems? How can music therapy practice profit by digitalised improvisation analysis? What are the implications of gender and age in music technology for therapists and the people with whom they work? All together, this book
supplies a broad perspective on its topic, which should be of interest to a wider audience.
The Centre for Music and Health at the Norwegian Academy of Music was established in 2008. The centre conducts research and dissemination. Its goal is to develop knowledge about the connections between music and health.”

An interactive technology for health:
New possibilities for the field of music and health and for music therapy?
A case study of two children with disabilities playing with ‘ORFI’
Karette Stensæth and Even Ruud

Potentials and challenges in interactive and musical collaborations involving children with disparate disabilities
A comparison study of how Petronella, with Down syndrome, and Dylan, with autism, interact with the musical and interactive tangible ‘WAVE’
Karette Stensæth

‘Come sing, dance and relax with me!’
Exploring interactive ‘health musicking’ between a girl with disabilities and her family playing with ‘REFLECT’ (A case study)
Karette Stensæth

‘FIELD AND AGENT’: Health and characteristic dualities in the co-creative, interactive and musical tangibles in the RHYME project
Ingelill Eide

Health affordances of the RHYME artefacts
Even Ruud

PARTICIPATION: A combined perspective on the concept from the fields of informatics and music and health
Karette Stensæth, Harald Holone, and Jo Herstad

Technology and clinical improvisation – from production and playback to analysis and interpretation
Jaakko Erkkilä, Esa Ala-Ruona, and Olivier Lartillot

Using electronic and digital technologies in music therapy: the implications of gender and age for therapists and the people with whom they work
Wendy L. Magee

During November we user tested the 4th generation of the RHYME Co-creative Tangibles, the Polly World, at the Haug School and Resource Centre. This is the last user tests the RHYME project conduct at Haug with the children that have followed the project for 4 years .  We like to take this opportunity to thank all Haug personnel, children and parents for their unique contribution and engagement in the RHYME project.

During the user study both children, parents, personal assistants, teachers, music therapists and occupational therapists participated and gave their responses to the Polly World. With the Polly World we have tried to put together all the demands, suggestions and wishes from users and experts related to the three earlier generations of RHYME’s Co-creative Tangibles, in addition to new Social Media functionality.
In the 4th generation of tangibles, family and friends explore interaction with social media, sending musical messages, using the PollyCompose App with a graphical interface and text in twitter. The family and other persons interacted and sent messages with picture projected in the physical tangibles Polly Land and Compositions to the mobile tangibles Polly Fire, Polly Ocean and Polly Planet

Rhyme’s design and development team is currently doing the last tests of the Polly Compose APP before the user studies with the families.
In the Polly Compose APP the user can interact with the Interactive things at home, Polly Planet, Polly Ocean and Polly Fire through a smartphone or a tablet (see photos below). Polly Compose has an easy to use graphical user interface (see the two picture in the middle) and text based (twitter)  user interface (see picture right) for more advanced music composition.

Testing the tablet interface on an iPad.

First you choose the Polly Compose APP on your desktop. The first, Scenes & Things-screen, of three  in the APP opens (see picture to the left).
There you choose Scene (music and visuals) and Thing (Polly Ocean, Polly Fire, Polly Planet). Then hit the [play] button at the bottom (see picture left).

The second screen with the chosen thing in the middle opens (see picture in the middle). Here you can test out the and learn how to play on the thing and how it sounds, before sending the composition to be played on the physical thing at home. You build up a composition by hitting the sensors on the screen representing the sensors on the interactive physical thing. You can also specify how you want the action to be performed (fast, slow, slow etc.).  A composition is being built up and visualized over the play and send buttons at the bottom of the screen (see right upper picture).
You play your composition by hitting the [play] button. You send the composition by hitting [send], and you edit  (see left lower picture) and save and give it a name by hitting [edit] .
You can go to the first screen and choose another Scene or Thing by hitting  [back].

We have created a little video about the physical interaction i Polly World (not the social screen based App interaction). The video is shot by Alexandre Chapell and edited by Mariko Rhode and Birgitta Cappelen. Thanks to Sara, Anders and Berit and their children for their contribution.

RHYME with 2 Keynotes at the Nordic Snoezelen Conference

RHYME contributed with two keynote lectures at the 10th Nordic Snoezelen Conference 2014 in Helsingør. The two lectures were Birgitta Cappelen’s Designing Next Generation Interactive MSE and Anders-Petter Andersson’s lecture Music in RHYME.
In Birgitta’s lecture she argued based on a democratic and humanistic perspectives and a resource oriented approach for a design of Multi Sensory Environments  (MSE) that offers continuous positive experiences and challenging mastery curve for diverse users. This demands a design that is both sensorially stimulating and easy in use and complex at the same time. This demands a computational and software solution that offers many ways to interact and develop actability and mastery over time, not only simple switch solutions.

In Anders-Petter’s lecture Music in RHYME he explained how the musical simplicity and complexity is built up, based on musical sounds and programmed rules that are activated in different user-situations.

The Nordic Snoezelen (also called Multi-sensory Environment – MSE) Conference is a biannual conference and the most important community in the Nordic Countries for use of sensory stimulation in therapy and health promotion.
The Norwegian Community is called Norske Sanserom, the American Community is called AAMSE and the international organisation ISNA. Within MSE very little has been done regarding use of advanced computational possibilities, interactive music and professional design and aesthetic competence when creating the Multi-Sensory Environments. In this context  RHYME is a unique project internationally. If you  want to read more about MSE research you will find a list here.

On 3rd July RHYME member Anders-Petter Andersson made a presentation of a paper by himself, Birgitta Cappelen and Fredrik Olofsson at NIME 2014. The title of their paper is “Designing Sound for Recreation and Well-Being”.  NIME, New Interfaces for Musical Expression, is the most important conference and community within music and technology. RHYME has for several years now been one of the few projects in this community focusing on developing musical artefacts and expression in a health related context. This is the third time RHYME has published at the NIME conference. NIME 2014 was held at Goldsmiths College at University of London, 30 June – 4 July 2014.