The name “ORFI” comes from “Or” for origami and “fi” for “field”. But ORFI also refers to Orpheus, the father of music in Greek mythology. He who according to the myth could make rocks dance. It is almost like ORFI…

The ORFI modules or cushions if you like communicate wireless with each other. So you can freely build, throw, play in and with the modules as you like. ORFI responds in changeable graphics, light and music, when you bend the wings of the modules.

Interact and co-create in Orfi
Bend the yellow wings on the ORFI -modules
ORFI responds in sound, light and changing graphics.

Create music with  Orfi
Musically ORFI is original with several new genres. Some genres are based on sound files that change depending on your interaction. Other genres are made from program code that are being executed and altered during interaction. A new genre we call Voxx, is based on the co-creators/visitors live sound recordings via microphones. The recording is manipulated, re-arranged and organised dynamically between the cushions. Other new genres based on dynamically changing program code are Mini with minimalistic music and Glitch with noise music. Two new genres exploring traditional melodic music and film music are Arvo based on Arvo Paerts “Alina” and Tati based on the soundscape of Jaques Tati’s film “Les Vacances de Monsieur Hulot”.

Create a field with Orfi
You can create your own landscape or field with the ORFI-modules.
1. Select cushion from cushions in three different sizes.
2. Form each cushion and create a landscape with the cushions.
3. Connect the cushions together. 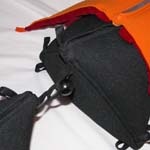 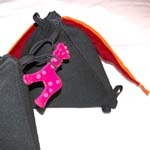 4. Inscribe your individuality by tagging the cushion with your own physical marks or objects, or with your own sound marks, recordings (Voxx).
5. Play.

ORFI – Anne and Adam musicking from RHYME.no on Vimeo.